War of the Three States Arc is the current and 20th story arc of the Kingdom manga.

Following the capturing of the city of the Gyou and a quarter of western Zhao during last year's campaign, the armies of Qin are currently facing a grinding and frustrating stalemate as they try to break through the defense lines of the newly reinforce Zhao armies of the central regions. With no major reserves or garrisons available to assist them due to the watching of the Chu's movements and the Han frontlines. The only reinforcements that they can consider would be from the Wei borders but if the Qin defenses are were to be weakened any further, the armies of Wei would launch an immediate invasion into their territory by crossing the Yellow River with a fleet of transport ships which could result in the loss of Gyou itself if the Qin were to fight them. As the potential danger grows evident, Shou Hei Kun proposes a plan of establishing an alliance with the state of Wei over in Kanyou.

Meanwhile, at Dairyou the royal capital of Wei, Great General, and the newly appointed the Fire Dragon Go Hou Mei returns from the frontlines with Ran Bi Haku and his personal army.

After greeting the Wei king Kei Bin, Go Hou Mei is told his counsel is desperately needed on a certain matter. Ha Ri, a strategist, tells him in his opinion it wasn't needed at all but the prime minister, Gek Ka Kou insisted on it. With the rumors of an alliance being proposed by Qin, Go Hou Mei asks how long did they ask for and Ha Ri tells him 3 years. Upon hearing it, Go Hou Mei immediately dismisses the notion and says The only answer this deserves is the severed head of their emissary which shocks the prime minister just a bit. However, Ha Ri tells him the exact details of the alliance which has divided the courts of Wei itself. With some slight dramatic pause that annoys Go Hou Mei, Ha Ri tells the Great General that it involves the Qin offering the city of Juuko, an infallible fortress that lies at the border shared by the states of Wei, Chu, Han, and Qin territories, and with assistance in taking the territory and they will give it to Wei, in exchange of a three-year alliance/truce. 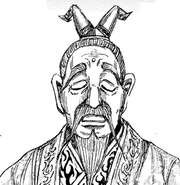 Gek Ka Kou, the Prime Minister of the state of Wei.

Ha Ri, a strategist of the state of Wei. 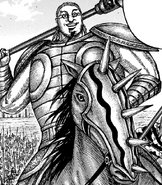 Man U, the lord of Juuko City and General of Chu. 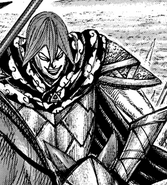 Sen To Un, a General of Chu station in the city of Juuko.

Gen U, a General of Chu station in the city of Juuko.

Ju Ko Ou, a strategist of Chu and the Sage of Juuko. 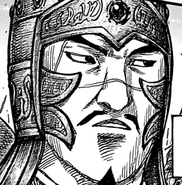 Jun Ei, a General from the state of Wei and one of the closest vassals in the Go Hou Mei Army. 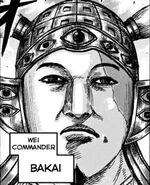 Ba Kai, a General from the state of Wei and deputy in the Go Hou Mei Army.

Ryuu Han, a General from the state of Wei and vassal in the Go Hou Mei Army.
Add a photo to this gallery

Retrieved from "https://kingdom.fandom.com/wiki/War_of_the_Three_States_Arc?oldid=92749"
Community content is available under CC-BY-SA unless otherwise noted.