Shi Ryou is a commander of the Qin Military, a deputy of general Sou Ou.

Shi Ryou is a tall woman with a powerful build and long, light hair falling over her left eye. While in battle, she wears a fancy light purple armor and always seen with a nearly omnipresent smirk on her face.

She's very confident in her abilities which can make her sometimes be a little reckless. She also showed her great deductive skills and the ability to think clearly in dynamic situations.

She was initially seen beside general Sou Ou. And when he received orders from Ou Sen to test Ri Boku's defenses, Shi Ryou quickly took to the task. The Zhao proved to be no match for her and riding her horse Kyapa Shi Ryou caused great damage to the enemy lines.

She eventually got too deep and met shield troops blocking her from going further. She was unable to pierce that formation, as the soldiers showed no hint of fear or bloodlust she could exploit for weakness. With this new obstacle, and with her Cavalry Unit already stretched out, she quickly realized it was time to regroup.

Her hunch proved to be right, as her enemies were closing the gap behind her, trying to cut her path of retreat, surround her and kill her. Although Shi Ryou temporarily retreated in that opportunity, she kept harassing the enemy trying to get to the Zhao HQ and kill its great general, Ri Boku, thus posing a great concern to Kaine (who felt personally responsible for her lord's safety).

In the next few hours, Shi Ryou nearly got to Ri Boku himself but was interrupted by the sudden arrival of Hou Ken of the Three Great Heavens. The Bushin's impressive might stunned the Qin, putting a halt to their assault for long enough time for them to be intercepted by Kaine's Unit - to the frustration of Shi Ryou who hoped she could single-handedly take Hou Ken. She later joined Sou Ou and renewed her attempts to close in on Ri Boku, worrying the great general himself.

Earl Kou then personally took to the battlefield in order to cut off Shi Ryou's advance, facing her in single combat. The battle was fierce, but very brief, as Shi Ryou overpowered the Earl, smiling as she sliced him shoulder to rib, to the despair of the surrounding Zhao forces.

After killing the Earl, she is seen briefly fighting with a desperate Kaine and easily overpowers the young commander as she is barely able to block Shi Ryou's strikes. And just as Kanie and her horse are sent reeling, she caught by Ba Tei who tells her that she should hurry over to Ri Boku's position before it collapses by the Qin right wing's pincer attack on his HQ and tells her, he will deal with Shi Ryou who simply smiles at him. She is currently engaged in a duel with Ba Tei, preventing him from going to Ri Boku's aid while giving Sou Ou and their army the chance to continued their frontal assault on his forces. She was later on seen in Gyou, and also alongside others, feasting in Qi's supply aid.

Swordsmanship: A powerful master dual-wielder, Shi Ryou demonstrated her prowess as she strolled over the skilled soldiers of the Ri Boku Army while mowing down entire scores of them with every swing of her twin blades as she easily cut through hardened formations like they were made of grass.

Immense Strength: Shi Ryou is a powerful individual with a strength possibly stronger or rivaling that of her commander and lover Sou Ou. She has demonstrated her prowess by carving deep crevices in infantry lines while charging from horseback while wielding her twin blades, and also when she was able to overpower Earl Kou sending the experienced commander reeling with each of her strikes and slicing clean through the large general's abdomen during their duel.

Fearlessness: While encountering the monstrous Hou Ken, she didn't hesitate nor flinch in trying to kill him and immediately charged towards him.

Getting ready for the divisive and final clash during the Battle at Shukai Plains.

A close up of Shi Ryou's face. 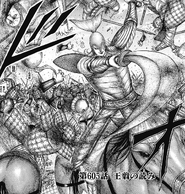 Shi Ryou leading a charge into the Ri Boku Army. 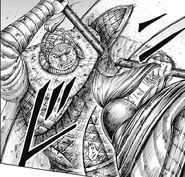 Dueling Ba Tei.
Add a photo to this gallery
Retrieved from "https://kingdom.fandom.com/wiki/Shi_Ryou?oldid=91906"
Community content is available under CC-BY-SA unless otherwise noted.