The Glaive that Great General Ou Ki has used from his early days as a member of Six Great Generals to the day of his death. Having grown fond of Shin and in recognition of his talent and potential, the general passed on his weapon to Shin.

After the three year time skip since the Coalition's Invasion, in order to prepare himself to wield it, Shin trained himself in wielding glaives and compensated his lack of skill with his immense strength, decimating entire cavalries and infantry soldiers with every swing of his blade and with his strength growing with every battle, normal glavies could no longer withstand his powerful strength and he has since then retrieved the weapon from Ei Sei's care, wielding it since before the start of the Western Zhao Invasion Arc.

In the 38th last episode of Kingdom Anime, you can see in the end scene (not seen in the manga) where Shin talks to Ei Sei about how he inherited the war glaive which is too heavy for him and how he wants Ei Sei to hold on to it until he is ready to wield it. Ei Sei then decides to tell Shin about what Ouki told him about King Sho's message and Ouki's dream of aiming for a unified China. He then says that with Ouki gone that dream is impossible now. But Shin disagrees and clearly states that it was he who inherited his weapon, and says that Ouki entrusted China to him and the lance to Shin and asks Ei Sei if he knows what specifically means.

Ei Sei then realizes the meaning and symbolism of it which makes them bound to each other  "The King and The Sword", where Shin replaced Ouki as the king's personal sword in their goal of a unified China and how they are going to be China's only king and sword.

Later in the manga at Chapter 286 during the Coalition's Invasion of Qin, where Shin yells out to Man Goku why the killing and the quest for revenge must stop also strengthens the anime scene's message and the meaning of the entire story itself "And I will be the unbreakable sword of his will."

Add a photo to this gallery 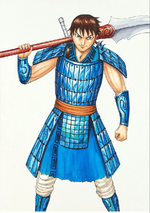 Add a photo to this gallery
Retrieved from "https://kingdom.fandom.com/wiki/Ou_Ki%27s_Glaive?oldid=89910"
Community content is available under CC-BY-SA unless otherwise noted.