Kou Yoku is a General of the state of Chu and is also known as the "Thunder", He is around the same age as Ri Shin, Ou Hon, and Mou Ten and a part of Chu's young generation of military commanders.

Kou Yoku is clean-shaven and has shoulder-length hair.

Kou Yoku's personality is similar to that of Shin's: Rude, laid back and intense when it comes to combat, he also appears to be an instinctual fighter down to the core.

Possibly since his days as a 100-man commander, Kou Yoku spent many years touring the Southern battle lines of Chu with Rin Bu Kun and Haku Rei.

After the Qin army had successfully conquered the Sanyou region of Wei, Kou Yoku and Haku Rei were stationed at the Qin border under the command of General Rin Bu Kun. He went to taunt the Hi Shin Unit with arrows for three days until Shin has enough and jumps from the top of their post on the cliff to kill him, He blocks the attack and they soon begin trading blows. The Chu retreat to stop a battle from breaking out but Shin continues to chase them. Kou Yoku fires arrows at him but Shin easily deflects them before Haku Rei knocked him off his horse with one shot. Shin then tells them the young 1000-Man Commanders of Qin are all monsters and they aren't in the same league. Later, he is scolded by Rinbukun for fighting Shin. He then asked him about Shin's abilities. He responds by saying he was nothing special. Haku Rei then says he is quite strong, but he's no match for Kouyoku with his Bakuya Sword. A few days, later Qin and Chu pull back their forces.

He was present for the meet up between Shun Shin Kun and Ri Boku. After the meeting, Rin Bu Kun asked Shun Shin Kun if Ri Boku was planning a Chu/Zhao Alliance. To which he told them that they were underestimating Ri Boku because it is something far more terrifying than they could imagine. Months later, he is part of the first wave of Chu forces invading Qin from the border and is shocked when their army encounters the Tou Army.

During the Battle of Kankoku Pass against Qin, Kou Yoku is placed in the Chu 1st Army along with Haku Rei, led by General Rin Bu Kun. He tried to kill Mou Ten, but Mou Ten easily parries his blows. Then he remembered Shin's words about the young 1000-Man Commanders of Qin and was about to pull out his Bakuya Sword but the duel was halted when Roku O Mi came charging in to slay Rin Bu Kun.

Later, when Mou Ten is about to slay Haku Rei, Kouyoku arrives to parry the blow, knocking Mou Ten off his horse. Before he can kill Mou Ten, Ou Hon arrives to save him and both forces engage each other in battle. Kou Yoku unsheathes his Bakuya Sword and duels Ou Hon. As they clash, word arrives of Rinbukun's death at Tou's hands.

At night, as they cremate Rinbukun’s body, he promises to get revenge by killing Tou.

The next day, he and Hakurei are transferred to the 2nd Army said to be dangerous even for allies; under the command of General Ka Rin. Later that day, everyone from the first army above the rank of 1000-Man Commander was gathered up. They were shocked to meet the giant, cold-hearted General Karin. She calls out Rinbukun's lieutenant Ro Kin. As he pledges his loyalty, she kicks and breaks his neck, saying she has no use for "incompetent fools who reek of that baldie." and that if it was up to her, they would all be executed. She later declares that the remnants of the 1st Army will fight that day with no assistance from her 2nd Army. And if they are unable to slay the enemy general Tou, they will all be executed. She leaves telling them that if they tell anyone about her height their heads will roll.

During the 15th day of the battle, General Karin, seeing that Tou himself is on the battlefield, promotes Kouyoku to a 5000-Man Commander and orders him to aim for Tou's head. Kou Yoku takes this opportunity to avenge his friend Rinbukun and heads out. In an attempt to surround the enemy general, Kou Yoku spreads his army while engaging Tou in combat himself. As the two men duel, their armies try to take each other out. This way, Kou Yoku keeps Tou occupied and prevents him from attacking the Ka Rin Army, who has now entered the battlefield as well.

He and Haku Rei make a cameo, along with Ka Rin and other members of the Chu military. They take part in the Battle of Gento.

After Shun Shin Kun's assassination he asssists Ka Rin during the meeting with Ren Pa and Ri En.

Ka Rin sent Kou Yoku and Haku Rei whom both are now Generals, to assist the Juuko army in repelling the Qin invasion led by Mou Bu. As soon as they arrive on the battlefield, they immediately engaged Roku O Mi Army in an attempt to wipe them out. But were given orders to reorganize the formation from Juuko army strategist when Wei army of 70,000 arrived as allies to Qin.

The battle of Qin-wei alliance (120,000 men) vs Chu (110,000 men) began with Chu losing ground. But was halted by the elites army of Man U Army and Gen U army. The tide changed when Ba Kai, general of Wei was slayed. Forcing Go Hou Mei to change Wei to take up as support role while the Qin army as offensive role to take down Chu HQ.

In the midst of the battlefield, Kou Yoku was ordered to handle Tou. Meeting Tou since the last encounter from Coalition war 6 years ago, Kou Yoku stated that Tou shouldn't blink or else he'll get slice up several times in which Tou replies 'he is a thousand years too early'. After a brief duel between the two. Kou Yoku was interrupted by the arrival of Ran Bi Haku and his army. Not realizing what Tou had in mind, Tou slipped pasts Kou Yoku and had his men follow him to strike at CHU HQ.

Kou Yoku, surprised of this event, chased Tou army before they could reach Chu HQ. Thanks to Haku Rei 'Snipe Shot', though failed to kill Tou, has given Kou Yoku a time to reach up to Tou but was again interrupted by Ran Bi Haku. Allowing Tou to captured Chu HQ, while Kou Yoku is preoccupied with the 'Berserker'. The fall of CHU HQ has forced all Chu forces to withdraw and regroup. Much to Kou Yoku dissatisfaction. Later on found out that Juuko city was captured by Wei army, Man U, having no intention o retaking back, decides to head to Chu's capital Ei. With their first campaign as general both for Hakurei and Kou Yoku leaving in crushing defeat, they were in a bad mood.

Leadership: While wielding his legendary sword, Kou Yoku has shown himself a capable leader and source of inspiration for his men.

Tactical abilities: Kou Yoku has shown the capacity for teamwork combining his unit with Haku Rei's very quickly in order to stall the combined assault of the Gaku Ka and Gyoku Hou Units and after being promoted by general Ka Rin, he led a hastily organized 5,000 men unit and lured out general Tou due to his status as a captain, his abilities impressing Ka Rin who called him "a talent to be nurtured".

Swordsmanship: Kou Yoku is heavily offense-oriented and a powerful master swordsman with great hidden potential which he demonstrated when he blocked Shin's Hi Slash which was reinforced by him jumping off a cliff, killing multiple veteran soldiers of a Qin army, withstood and blocked Ou Hon's spear thrusts, and fought one on one with General Tou's Rasen swordsmanship for a considerable amount of time which was incredibly impressive given that the man killed his general just a few days earlier.

Immense Strength: Living up to his title of Thunder, Kou Yoku possesses monstrous strength, with Ri Shin commenting on how heavy his sword strikes were during their brief clash and during the Coalition Invasion of Qin, he later demonstrated even more incredible feats as he sent Mou Ten flying off his horse during his attack on Haku Rei 's position, and sent Ou Hon along with his horse reeling off the ground, and possibly one of his feats to this date includes blocking and stopping General Tou's Rasen - Faru Faru sword strike.

Immense Stamina & Endurance: Kou Yoku also displays an impressive amount of stamina as he withstood multiple glaive strikes of the Tou Army soldiers during his attack on their general and kept fighting on despite excessive blood loss during his duel with Tou.

Archery: While not as potent as his best friend Haku Rei, he also demonstrated some considerable skill in archery as he was able to aim at Ri Shin's chest while riding a horse. 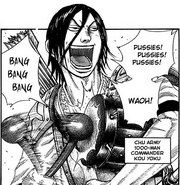 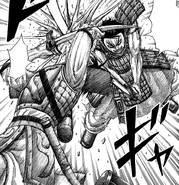 Firing an arrow at Shin. 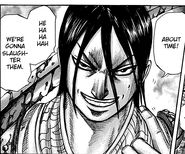 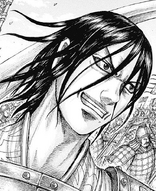 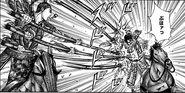 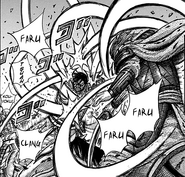 Add a photo to this gallery

Retrieved from "https://kingdom.fandom.com/wiki/Kou_Yoku?oldid=95579"
Community content is available under CC-BY-SA unless otherwise noted.